Under the banner of scientific research, a basic pillar for the construction and development of the science of physical education and sports at the College of Education and under the auspices of the Minister of Higher Education and Scientific Research under the supervision of the President of the University of Kufa (Prof. Mohsen Abdul-Dhalimi) In addition to the Iraqi researchers from the universities of Iraq, a number of members of the parliament and the presence of the President of the University of Kufa and administrative assistants and the Mai and a number of personalities and officials in the province of Najaf and the deans of the faculties of the University of Kufa and a large number of university professors, the curriculum began with a verse of the Holy Quran and then the national anthem and read Al-Fatihah in honor of the martyrs of Iraq and the presentation of a documentary film for the College. Qasim Mohammed Hassan Al-Khakani) that the conference aims to hold joint scientific agreements with Iraqi universities and at the global, Arab and local levels through visiting our faculty and to learn about them, exchange common scientific experiences and discuss the scientific researches that participated in the conference, One hundred scientific research and the two workshops of work in addition to the scientific quality and a book fair lecture, adding that the conference includes multiple events which will see scientific and tourist trips to the researchers for various monuments and modern scientific centers, as well as visit the holy sites and shrines in the province of Najaf 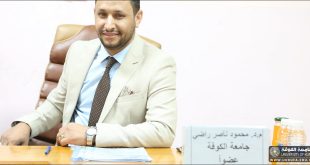 A teacher publishes research in an international journal within Scopus containers

The teacher, Dr. Mahmoud Nasser Rady, published a scientific research entitled (The Effect of the …